There’s no denying our love affair with coffee, and it pretty much goes without saying that coffee is a big part of our everyday lives. What’s interesting, though, is seeing how such an everyday, widely consumed product can have such an effect on our work life, too, and on the spaces we live that work life in. The office of the future will be shaped by dynamics that differ from today’s, and coffee might just be the surprise driver of its innovation.

It’s no longer a secret just how big an effect coffee typically has in kick-starting the brain, refreshing our focus, and on all those other things that help us feel switched on, as it were.

Tradition has it that coffee is a beverage best taken on wakening, when we need a mid-morning boost, or after meals (to stop the food coma kicking in). What was once conventional wisdom has since been more than vindicated, as widely attested by such acknowledgements as this by the Institute For Scientific Information On Coffee.

A little back story on the Work Café

In the popular imagination, coffee has always been an extremely powerful social glue: the expression “coffee break” has been adopted by every language across the globe. However, the origin of the link tying together the role of coffee and how it’s enjoyed in our society dates back farther than we might think.

The first coffeehouse was opened in London way back in 1652 by a Greek merchant, drawing on his experiences while travelling through Turkey. The use and consumption of coffee owes its progressive rise to his inspired vision, which eventually spawned the coffee culture we know today.

The reasonably well cultured English middle class, along with intellectuals and merchants, started to see the coffeehouse as the very hub of their work life, a nerve centre for interweaving business contacts, dealings and friendships.

In the centuries that followed, the cities experiencing a boom in coffeeshop openings fell into two categories. On the one hand, there were the seaside centres where trade was pretty well developed.  On the other, cities linked to the aristocracy and the middle classes, from Vienna to Florence, from Dublin to Turin, followed some time later by Milan. So we can see how the meaning of coffee has evolved over the centuries: going from a humble beverage to what could be termed a symbol and metaphor.

Science tells us that a coffee break is good for productivity

As a recent survey revealed, one out of three workers say they’re too busy at work to take a coffee break. The paradox in all this is that – as we pointed out earlier – the very driver promoting focus and productivity is linked to the act of switching off, taking a short break, maybe even to grab a coffee.

The European Food Safety Authority –  in a recent paper – also espoused this new stance, highlighting the positive effect of caffeine on a person’s ability to concentrate. The 75mg dose – in people who don’t overindulge – has two undeniable merits: boosting short-term memory (the one we need to work) and minimizing the number of mistakes we end up making.

Coffee, a metaphor and driver for a new way of working

These kinds of needs are becoming more and more pressing in the world of work, and we’re also seeing an increasing awareness of the issue, to the point that many businesses are pushing coffee-oriented measures. As we’ve explained before, work is changing, or at least the forms it now takes.

Until a few years ago, cafés were regarded as a place “outside” the workplace, whereas now, with the development of increasingly worker-friendly workspaces, they’re being integrated into the office layout. In modern spaces, you’re increasingly likely to come across an open-plan space for chilling out as you get your caffeine fix.

The popularity of lounge areas in workspaces is growing, providing a place for hanging out with co-workers in a much more informal setting. To say that coffee can shape a new way of life at work might be going a bit too far. However – not unlike the origins outlined in its back story – it certainly stands as a liquid metaphor for radical change. A process that’s actually already under way. 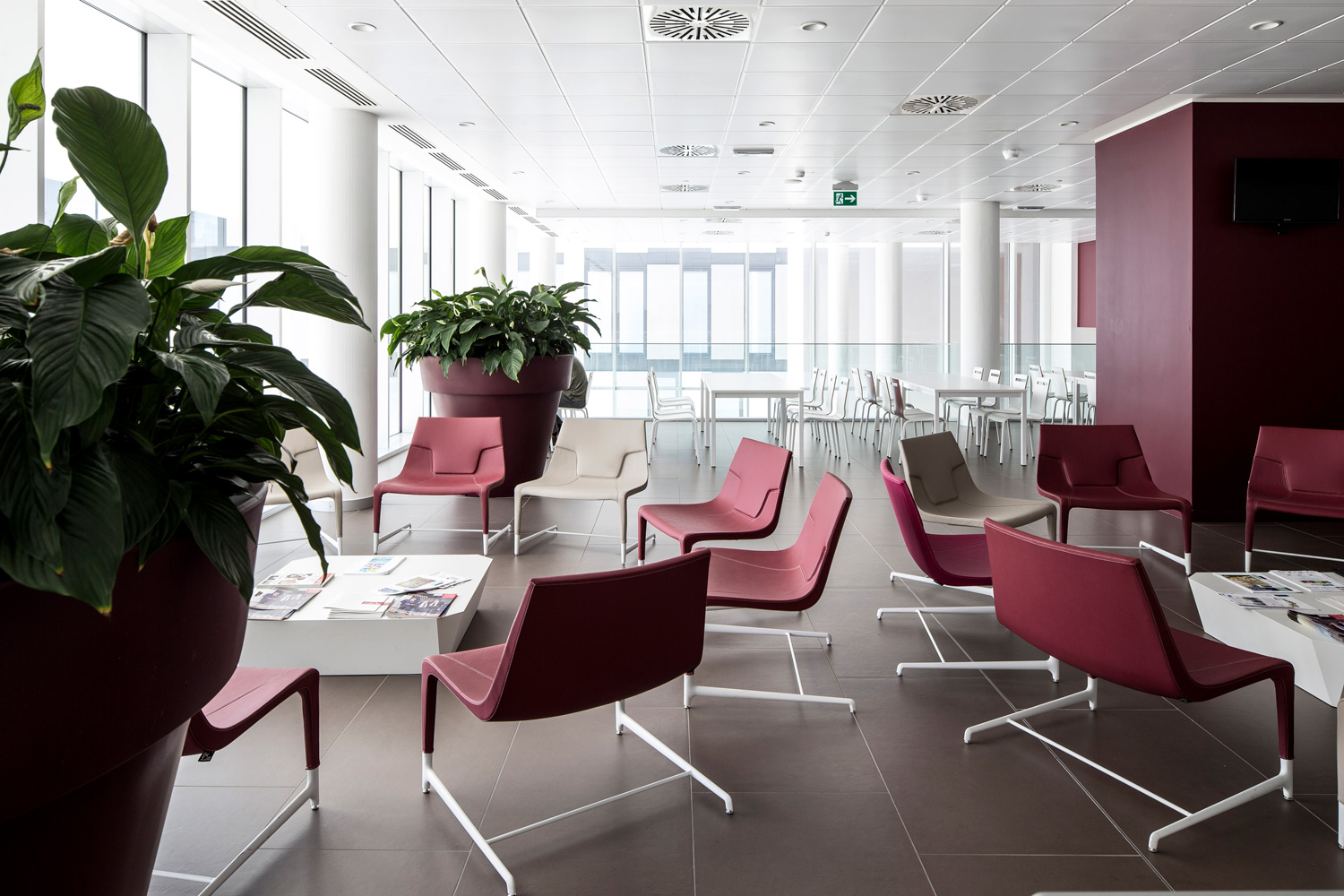 Coffee culture is now an integral part of the design of modern offices, which are even embracing its aesthetic and functional principles. Work cafés are designed with comfortable modular furniture systems to create a place where you can still work, but in comfort, as well as read, unwind for a moment or have a quick catch-up, providing everything you need to perform your office duties.

Its design has to focus on offering spaces that will allow people to interact spontaneously and must also be able to adapt to suit tight spaces as well as cavernous areas. Acoustics also plays an important part in achieving a successful design, because the work café can’t be a no-speaking zone, but it can’t be too noisy either.

The key aspect, though, is understanding the needs and dynamics of the people working in the office. 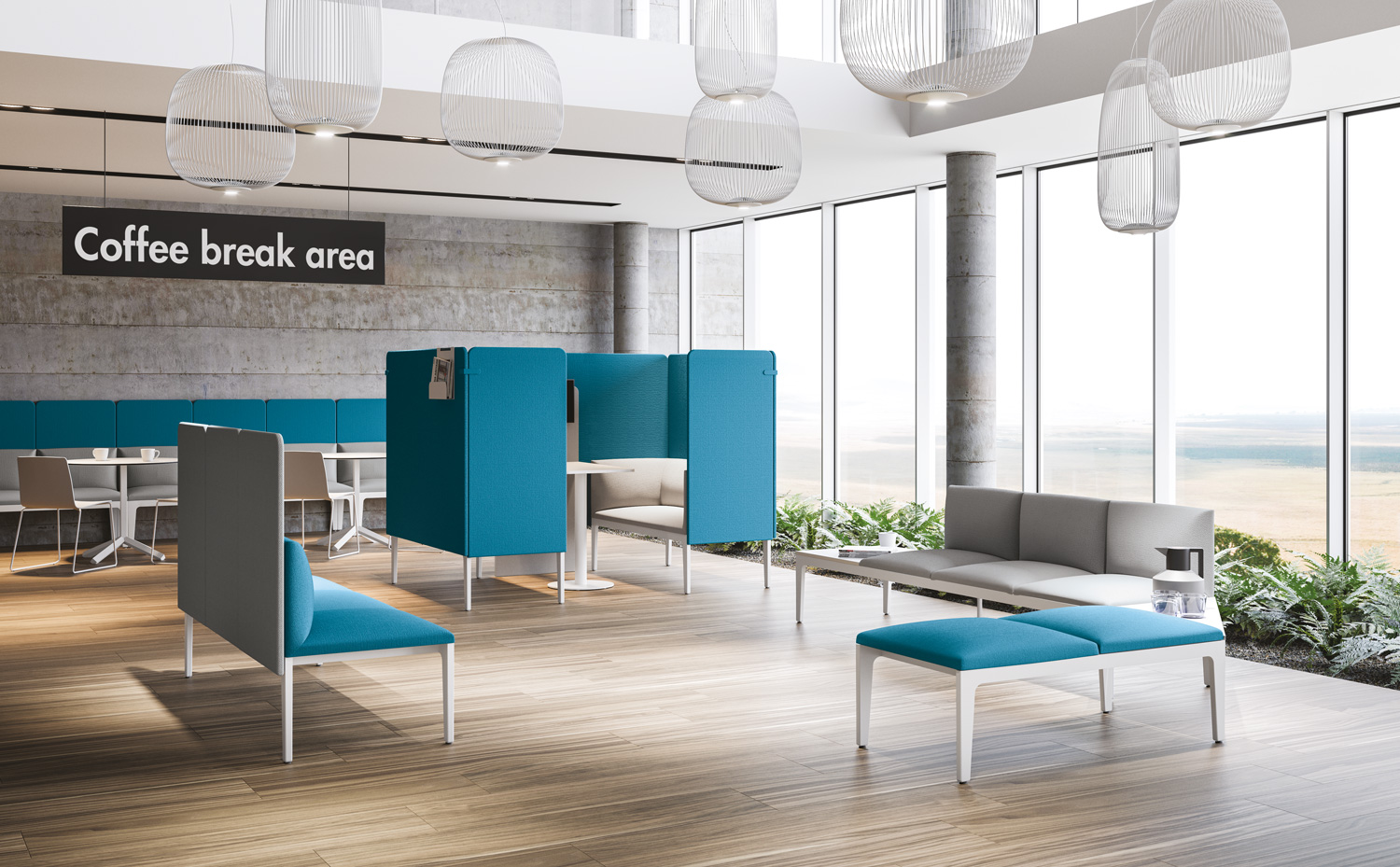